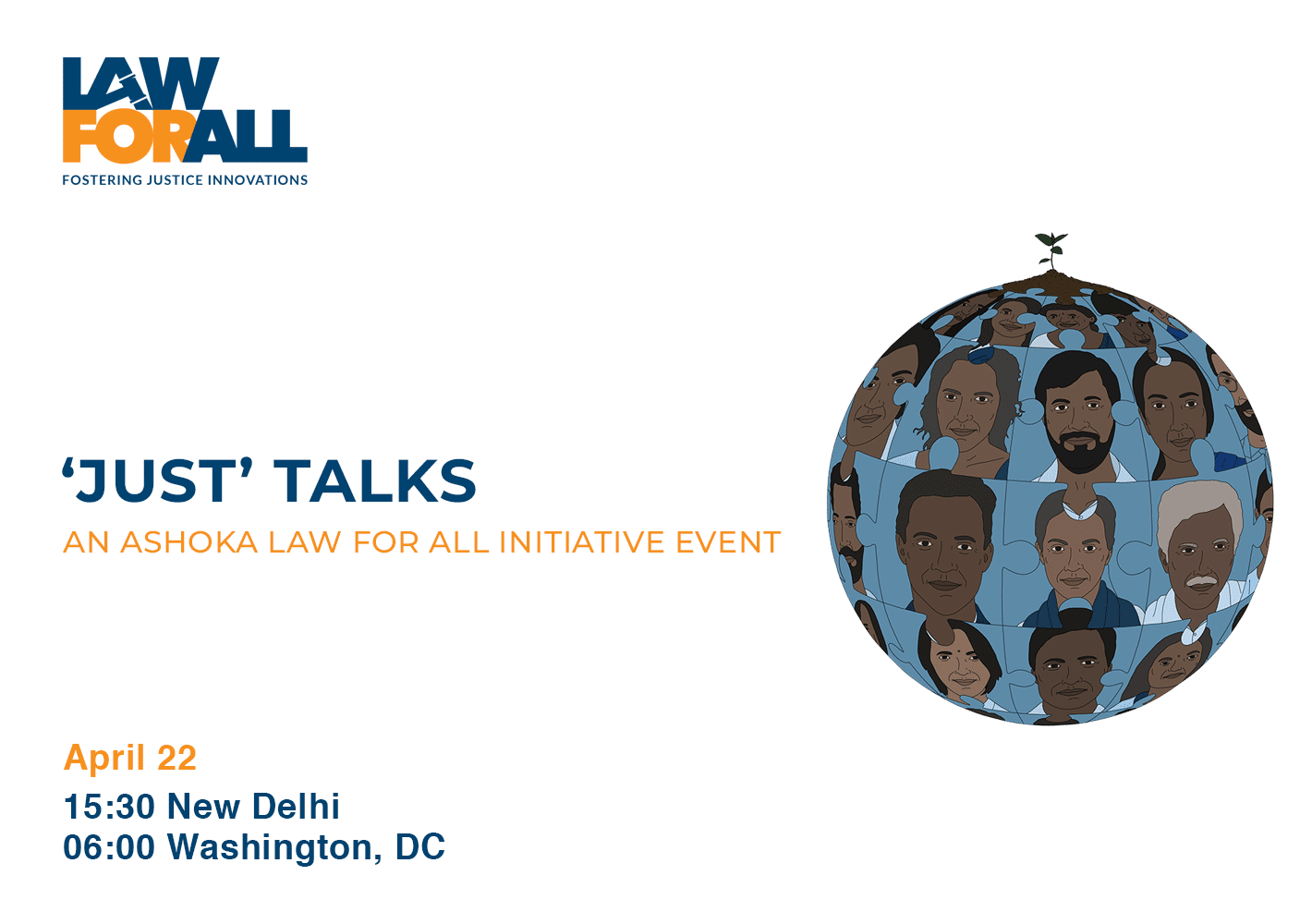 Register Here
This Event has passed. You can learn about other upcoming Ashoka events on the Event page.
Discover More Events

The India Justice Report is a first of its kind national periodic reporting that ranks how well the governments of 18 large and 7 small states have equipped their formal justice systems to administer justice to a reasonable standard.

Through the filters of human resources, infrastructure, workload, and diversity it assesses the capacity of 4 pillars of the justice system to deliver to the mandate: police, prisons, judiciary, and legal aid.

Importantly, by comparing data over five years, the IJR assesses efforts governments make annually to improve the administration of justice. This trend analysis helps discern each state’s intention to improve the delivery of justice and match it with the needs on the ground.

The findings of the report are important for donors, civil society, and the business community as well because it provides them, with objective data to shape their recommendations. It allows for participatory dialogues between governments and active citizens enhancing the chances for reforms through consensus building.

At a glance, the participation of women across the justice system remains very low, hovering around 10% in the police force and prison systems. Additionally, women’s representation is far better in the lower courts of the judiciary but it fails to make a dent in the upper levels. In term of vacancies (across the fields of police, prisons, judiciary, and legal aid), states have stagnated at around 20 to 30%. In Uttarakhand, for instance, vacancies reached up to 60% for officer-level positions in the police force and 70% for medical positions, representing an extremely alarming trend in the country. Additionally, correctional staff vacancies, across the nation, stands at 40%. The judge-population ratio in India stands at 21 judges per 10 lakh people, while the number of pending High Court and Sub-Court cases in 2022 has increased by 10% and 5%, respectively. Prison population rates have stagnated around 120% with certain dense urban prisons reaching up to five times its maximum capacity. Additionally, the population of under-trial prisoners have increased to 70% over the last few years.  In regards to the stipulated quotas, no state other than Karnataka has met their SC, ST, and OBC quotas in the police force. According to the various Acts regarding the provision of legal aid, it must be reasonably accessible by 80% of India’s population. While insufficient at meeting such a target, per capita spending on legal aid rose to ₹1.27 in 2022-23 from ₹1.05 in 2019-2020.

As per the published rankings, smaller states saw massive changes in their rankings. As a result of significant reforms in prison systems and the provision of legal aid, Tripura, which ranked last in 2019, ranked first in 2020. The large and mid-sized states, on the other hand, experienced lesser reshuffling, with Bihar showing the most improvement in policing and legal aid. The overarching objective of these published rankings is to help states identify a myriad of smaller goals to focus on, in order to achieve a larger objective and increase their overall ranking.

Learn about other events happening in the Ashoka community